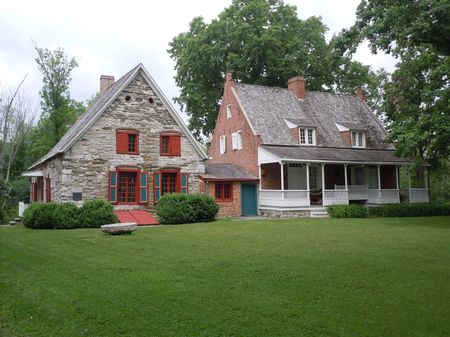 The Bronck Museum features what may be the oldest surviving dwelling in upstate New York. In 1663, Pieter Bronck constructed a single-room stone structure, which was enlarged in 1738 by Bronck’s grandson. The 1738 enlargement features typical characteristics of Dutch architecture, including sloping dormers and parapet gables. The home and surrounding farm remained in the Bronck family for eight generations before being donated to the Greene County Historical Society. Today, rooms are decorated with 18th-century woodwork and feature many Bronck family pieces. Outbuildings include a 19th-century kitchen dependency and three barns (among them the state’s first 13-sided barn), as well as displays of agricultural tools, sleighs, and wheeled vehicles.