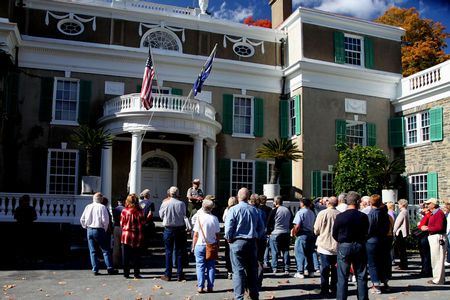 The lifelong home of Franklin Delano Roosevelt, America’s 32nd President. Purchased by Roosevelt’s father in 1867, the home was a large but simple Italianate farmhouse. By 1915, Franklin and his mother, Sara, had completed extensive renovations that included the stucco and fieldstone exterior, the addition of two large wings, and a columned portico. Interior decorations reflect the lifestyle favored by this “old money” family. Inherited by FDR upon his mother’s death in 1941, the house and much of the estate were transferred to the federal government in 1945 at the President’s request. Its interior remains as it was during Roosevelt’s lifetime. The grounds feature flower gardens, outbuildings, and miles of walking trails. The Rose Garden contains the graves of Franklin and Eleanor Roosevelt.