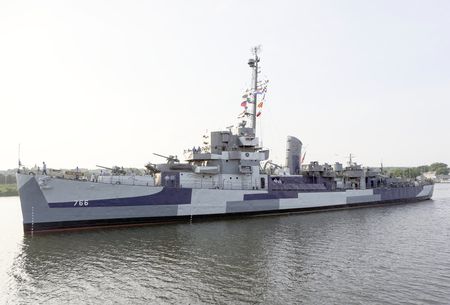 The USS Slater, docked on the Albany waterfront, is the only World War II-era destroyer escort still afloat and the only one in existence with its original battle armament. Launched in 1944 and named after Alabama sailor Frank O. Slater, killed during the Battle of Guadalcanal in 1942, the Slater saw service in both the Atlantic and Pacific Oceans during World War II. In the former, it protected convoys of men and material from Nazi U-boats; in the latter, it defended naval task forces from Japanese submarines and kamikaze attacks. After the war, it was transferred to the Greek Navy, where it served as a training vessel until 1991, when it was donated to the Destroyer Escort Historical Museum. Six years later, it found a permanent berth in Albany. Guided tours of the 306-foot long vessel, often conducted by Navy veterans, highlight the activities of the crew and explore the navigating bridge and radio rooms, the ship’s weaponry, and its berthing spaces and mess rooms.