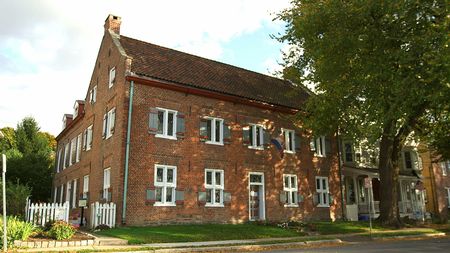 Originally constructed for Hendrick Van Rensselaer, the grandson of Kiliaen van Rensselaer, the first patron of Rensselaerswyck, whose landholdings encompassed much of present-day Albany and Rensselaer counties. The Crailo estate encompassed about 1500 acres east of the Hudson River, part of which was in present day Claverack in Columbia County. The home was as a fortress, with thick walls, gunports and even a palisade at one point, which served the family, tenant farmers, soldiers and slaves well in times of threat. Later in the 18th century, the brick structure was remodeled, first in the Georgian and then the Federal style. Exhibits focus on the daily life of the Dutch colonists, and include examples of household objects, games, furniture, weapons, and building materials. Also on display are artifacts uncovered during archaeological digs at the site of Fort Orange, erected in 1624 near Albany to serve as a trading post for the first Dutch settlers.