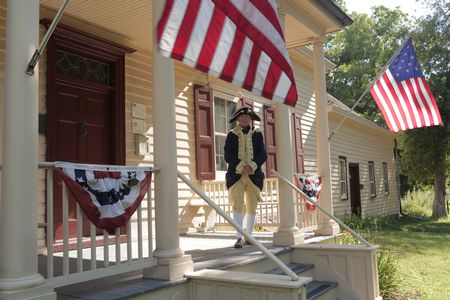 This Dutch Colonial house was built by farmer Cornelius Van Wyck in multiple phases, beginning with a simple
one- to three-room dwelling in 1732 and ending with an elaborate addition sometime before 1757. When Fishkill
was chosen as the site of a supply depot to serve the northern branch of the Continental Army during the Revolutionary War, the home became the headquarters of the sprawling complex. It was visited by numerous dignitaries, including George Washington, the Marquis de Lafayette, Alexander Hamilton, and John Jay. Here also occurred the mock trial of Continental spy Enoch Crosby, upon whose exploits James Fenimore Cooper allegedly based protagonist Harvey Birch in his novel, The Spy. Today, the home contains original woodwork, archaeological relics from the depot, 18th and 19th-century furniture, and portraits by noted itinerant painter Ammi Phillips. Displays also highlight various Colonial crafts, including woodworking and weaving.