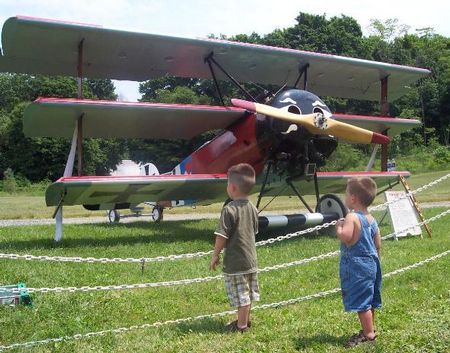 The Old Rhinebeck Aerodrome features one of the country’s largest collections of early aircraft, spanning the late 19th century through the 1940s. Among the rare (and, in some cases, extremely fragile) vehicles on view are a 1902 Wright Glider; a British Sopwith Camel, German Fokkers, and other mainstays of World War I dogfights; relics from the great barnstorming days; and planes with other familiar monikers, such as Bleriot, Curtiss, and DeHavilland. Many of the planes are still in working condition and are flown during weekend airshows. On Saturdays, the “History of Flight” show features early aircraft—including a 1909 Bleriot, the country’s oldest flying plane—as well as a simulated World War I dogfight. Visitors can book flights in an open-cockpit biplane that soars over the Hudson River and the surrounding countryside. The Aerodrome’s museum also displays antique autos, trucks, and motorcycles of the period.